Hera and her son Philagros were sent to King Minafula, king Minafula hated them because Hera was the queen of gods she was zeus wife but she wasn’t always with him.

When Hera and Philagros heard that they were invited to the king palace, they were a bit worried because they were not used to be invited for a drink in king Minafula palace, first they thought maybe it’s a mistake but they asked the massenger if it’s true but the massenger said that the king said “i need to give it to you specially” the massengair said while hera was taking a sip. “I don’t trust king Minafula” said Philagros.

After about a minute Hera started coughing out loud, at the beginning he son Philagros thought it’s nothing and it’s will go over in a minutes, but Hera cough continued and continued so Philagros started worrying.

First Philagros gave his mother water, and tup on her back he thought that maybe that will help, but that didn’t help, she continued coughing until he fainted
Philagros first didn’t know she fell asleep or she was dead or she fainted and he didn’t know how that’s happen, but then he saw the the half cup with the drink that king Minafula give them. Philagros got really angry and upset that he spilled the drink on the floor and shouted “ YOU KILLED MY MOM!”.

“Ohh, I didnt killed your mom your mom is fainted, your mom is a god she just fell asleep, but if you won’t give her the drink in twenty four hour which is a day, then she will be dead for ever”, laughed king Minafula.

“ What are you talking about? Which drink? Where can you find it?”, asked Philagros.

“That drink is the only drink that can save your mother, it’s found in a small tower but a very high tower, in that tower there is a hundred floor, in every floor there is monster waiting for you, if you succeed all of that floors you will be the next hero, the drink is on the level one hundred and one, you can get the drink just if you are strong and brave.”, said king Minafula.

“ I am very strong and also brave so I think I Can succeed this mission”, told him Philagros.

“Now listen they say no one come back from this tower. This is the tallest tower,

“ I can win this “tallest tower in the world ”, said Philagros.

“ will see”, said king Minafula
Time had was and over, Philagros thought if he want to try to kill and win those monster. After about an hour he came ready to the journey, he felt like he is the one who can save his mother no one else can, he was only eighteen, so the only thing he had is his weapon and his believe was that he is his mom own hero, and the protection cloth of a fighter. And shout “I am ready!”.
When he got to the highest tower he saw lots and lots of dead skeletons all over the place, this made him a bit scared, but he didn’t give up.
When he got to the first floor he saw this really really weird monster, that monster was huge, the color of her was very light green, But Philagros wasn’t that scared so he took the weapon and went over the monster and then went behind her back and cut her head off. Philagros was really proud of himself , but then he thought about his mother how she is sleeping there with king mindful and then he looked at the time and saw that he only has five more hours.

So he continued winning until level number ninety five. When he came to level number ninety five he saw all over th the place dead skeletons and then he looked at the monster and saw that she eats people. Philagros was about to go down but then he looked back at the monster and realise that he is coming near and near him so he took the weapon and cut both of her legs then the belly.
When he came to level number one hundred he saw all over the place dead people so his made him scare but when he saw the monster he was about to go down but then he thought about Hras hero he will be the next hero and his mom will survive if he will win this level, so he came back to the monster the monster was very dark purple Her hair was snakes so as her tail was , but philagros wasn’t sacre so he when he took the weapon and put it in her belly.
He run up the stairs to get the drink when he came to get the drink his father Zeus was waiting for him, he was sitting there with the drink. First Philagros didn’t know who was that so he asked him for the drink, his father Zeus gave it to him and says,

“Remember, never give up”.
When he came back to king Minafula tower he took the drink and put at his hera mouth. His mom woke up after two minutes and she already knew what happen because she was a god.

“ You are my hero you are Hera’s hiro, you are my own son for ever” Hera added. “Your smile light up my life.” Hera told her son Philagros while she was smilling at him. Then Philagros smile back to her.

And then he remember never give up always come back and try again.

Cave artCave art was the first art.It’s made of ocher, color, red yellow.The color they use are , yellow, red, black, and orange.

They drew animals.The people who drew it was the early human.Did they only drew animals or they drew other things beside animals. I think we are learning about cave art because we want to know what was the first art and it’s important to know what art was the early humans doing. I think the purpose is that we learn what was the first painting and what materials did they use, to make this painting , and what,and what is .the ancestors was panting.  I learned that the pre art cave painting was the first art painting.

I think for me the most meaningful part in the Art cave painting is that we learned that what was the pre history art wasd that we got a chance to be like the pre history and pant like them in the cave. 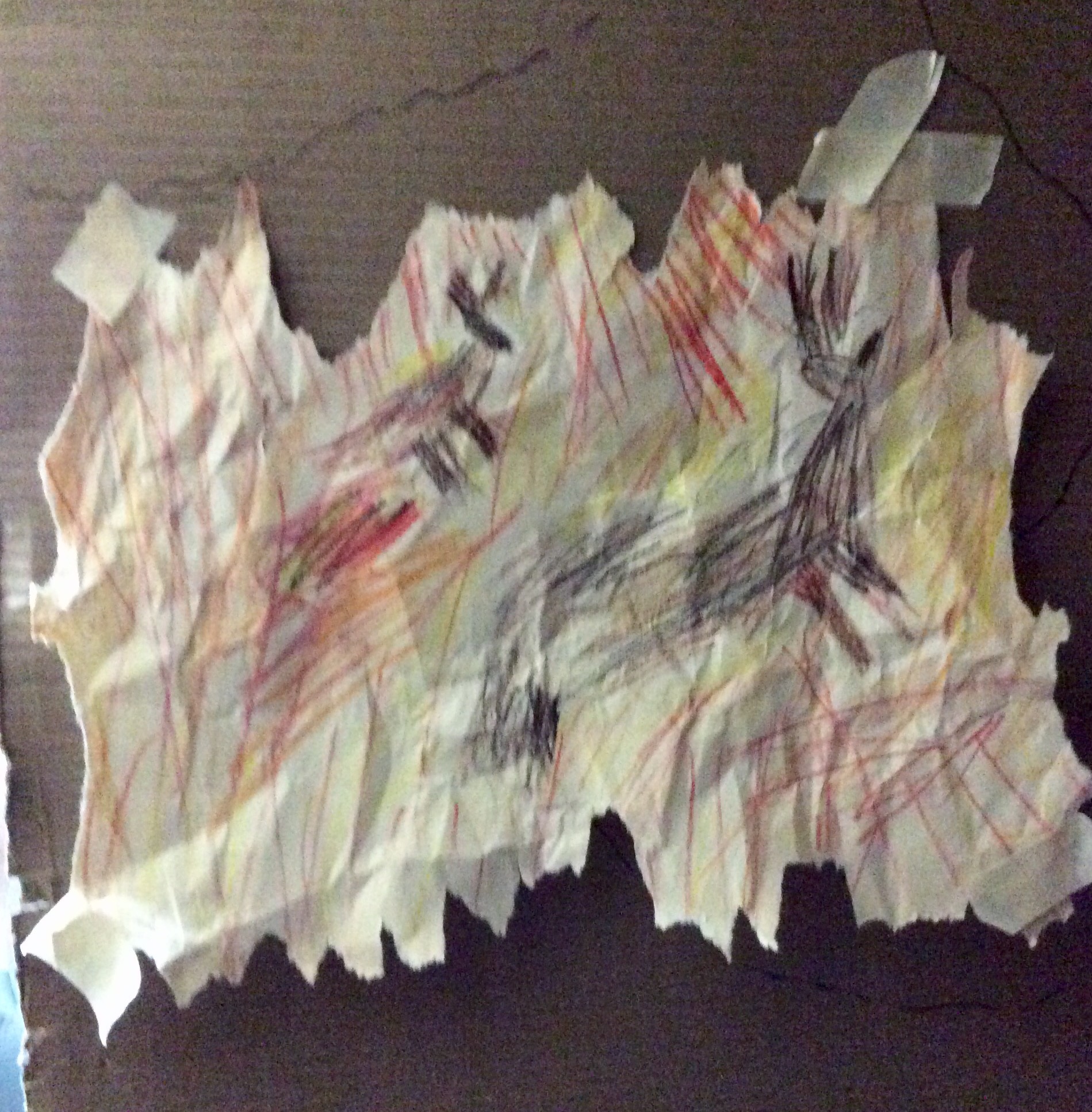 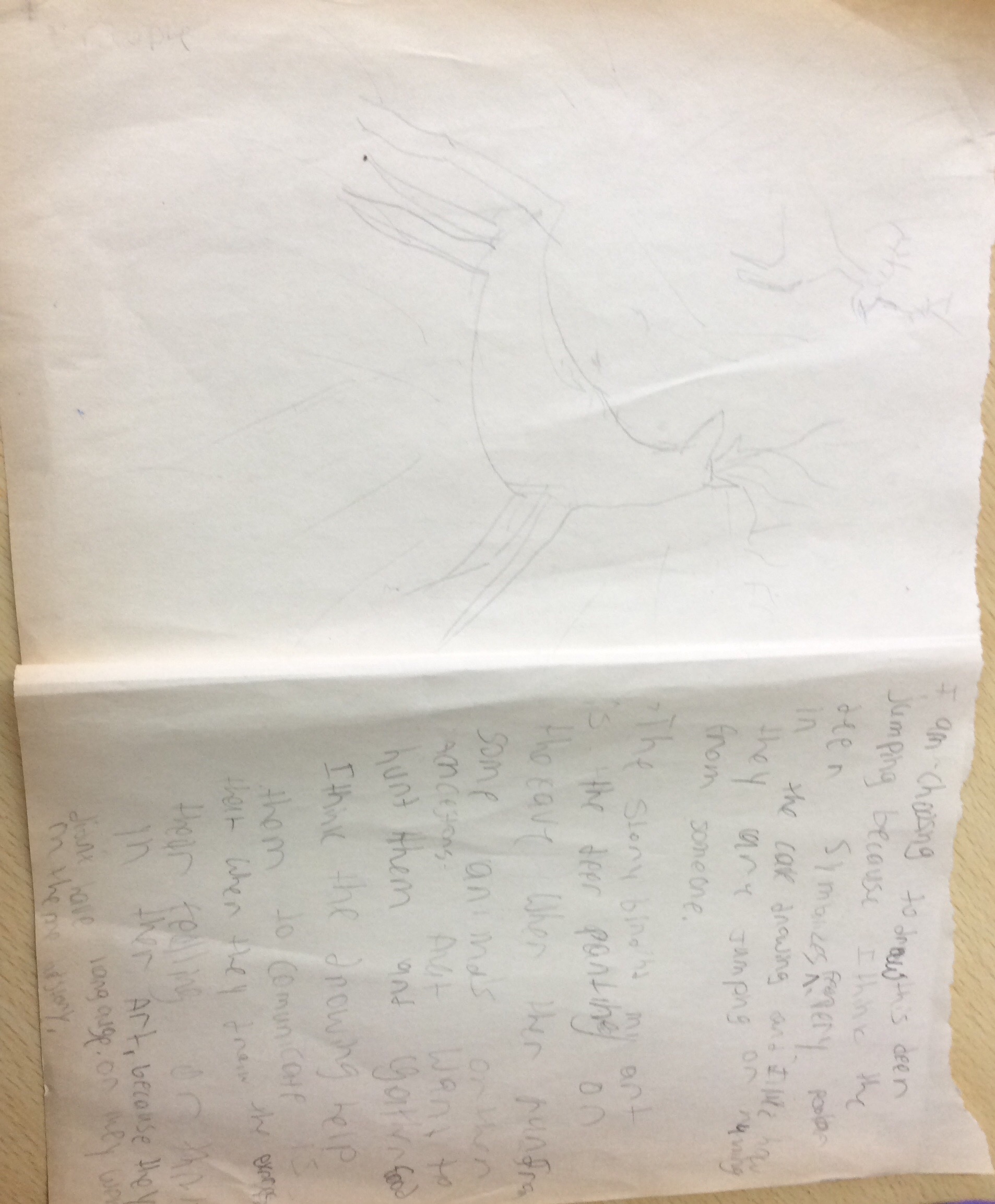 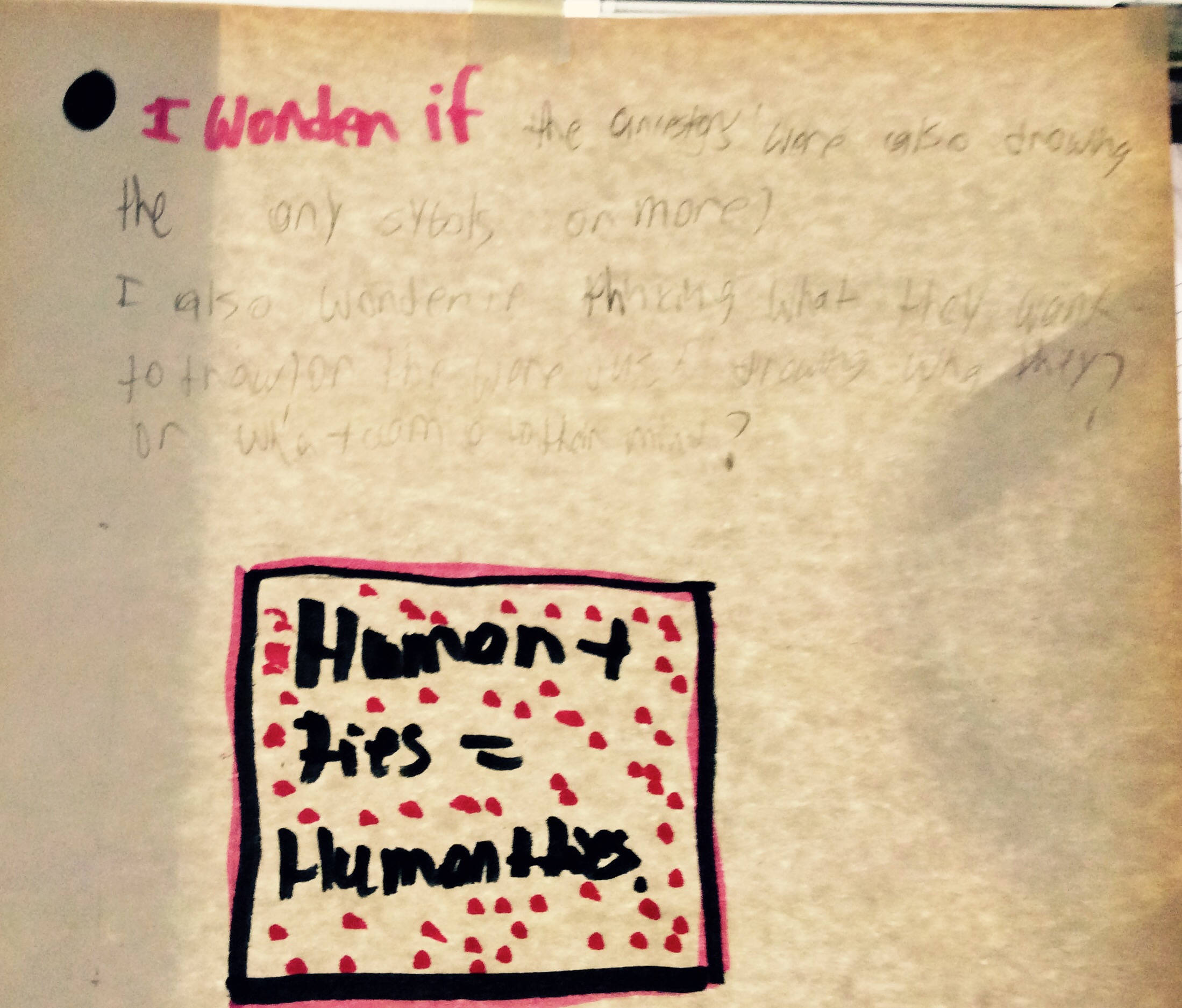 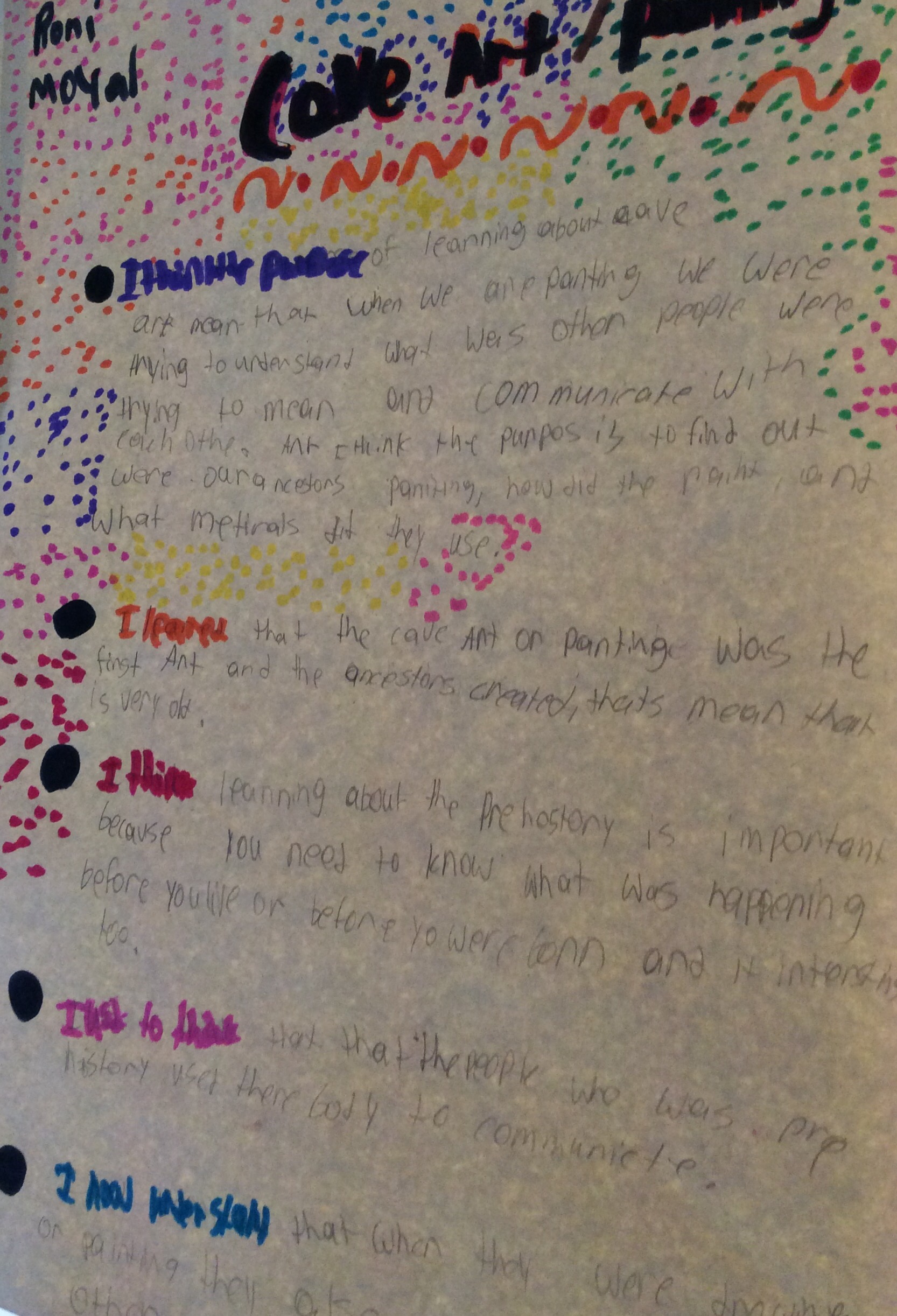